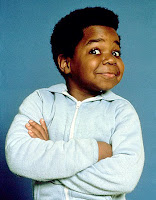 I was involved with my grandmothers memorial service the week Gary "Whatch-you-talkin-bout" Coleman died from a severe head injury and I completely missed the announcement in the news.  Coleman and both of his TV siblings (Dana Plato and Todd Bridges) all had many troubles & rough lives after Diff'rent Strokes went off the air.  But during the show's run we all certainly enjoyed their characters (all only a few years older than us 88ers) and never would've imagined that their futures would have turned out so sad, including Plato's suicide in 1999.  Unfortunately, many child stars that we grew up with ended in disappointing and dreadful lives.

Here's a nice tribute to Arnold Drummond from a fellow 80's fan, including a couple of video compilations of his finest moments.

And below is the CBS news video of Coleman's death.