In Memory of Belinda Reynolds

It has been over twenty years now since we lost our classmate, Belinda Carol Reynolds Ellis. She and her husband, Eddie and their 3-month-old son, Brian Keith, died in an automobile accident on this day in 1998.

Please visit her memorial page on our 88 website to read her obituary, see photos and leave your thoughts/comments. Anniversaries like these are always an opportunity to write or call the family, if you're still in touch with them (Belinda's parents are still living in Sheridan), to let them know you're thinking about them.

This is also a time to be thankful for life and family and to remember how our days are numbered.

In Memory of Detra McMurtrey 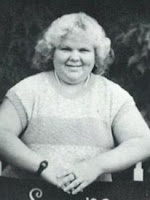 Today marks the 10th year of the death of our classmate, Detra McMurtrey. She died on Sunday, February 13, 2000.

Please visit her memorial page at our 88 website to read her obituary and leave your thoughts. If you are still in touch with the family, perhaps an encouraging card or phone call might be appropriate, just to let them know you were thinking about them.

My desire is to remember our deceased classmates throughout the year on the date of each of their deaths to keep their memory fresh in our minds & give us all a reminder to number our days.
Posted by Aaron 1 comment:
Email ThisBlogThis!Share to TwitterShare to FacebookShare to Pinterest
Categories: classmates, death

We Are The World... The Remake

So I'm sitting here at the Crain Ford dealership waiting on the family wagon to get some recall work done and on the tv I hear a story that catches my all-things-80s ear.  It appears that, in an effort to raise funds for Haiti relief, a group of musicians and actors/actresses have gathered to record a new version of "We Are The World."

I only recognize a few of the names in this new cast, and frankly, of the names I do recognize, I couldn't tell you a single song they sing.  Perhaps as my children grow older I'll end up with some 'Lil Wayne or Jonas Brothers on my iPod.  But I doubt it.  Here's what I do know about the remake.


There are no public videos of the recording yet, but my guess is that they'll be popping up soon.  For now, here's rapper 'Lil Wayne commenting on the news that he would be singing Bob Dylan's line.  [SIGH]