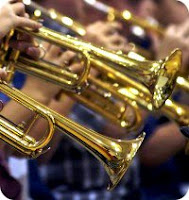 Here are four songs from the 1983 Junior (middle school) Band Christmas Concert. We were in the 8th grade, so this would be our last year in junior band. If you listen to the first song, you'll hear just a bit of Mr. Ed Grissom introducing the songs.

What Child is This?
Of course, there are no lyrics sung to any of these band performances - you'll have to find some archived choir recordings for that - but did you know that there are two "missing" verses to "What Child is This?" that you've probably never sung in church - or anywhere else for that matter? If you can endure these four songs, I'll show you the two missing verses at the end of the post.

Title Unknown
That first song wasn't too bad, was it? This next song is fun to listen to, but I don't know the title. A special prize goes to any former Jr Band member who can tell me!
**UPDATE: I was just listening to this again & it hit me - the title is something like, "Santa's Toyshop".

All I Want For Christmas
(Is My Two Front Teeth)
This song is dedicated to those awkward tooth-losing years.  If you don't know what I'm talking about, just look at our 2nd grade yearbook!
RIGHT CLICK to Download
Holiday Sleigh Ride
If you were ever in concert band, then you'll no doubt remember how much fun this song was to play. Just think of how enjoyable it is to listen to (well, maybe not when a bunch of 13 year olds try to belch it outta their horns...) and you can imagine why it's so fun to play. One fortunate percussionist each year would get the honors of doing the whip crack SFX by using a couple of 2x4's hinged together. When the music called for it, you'd slap the two boards together to make a loud "crack". You were really cool if you could split the 2x4's by slapping them too hard.
RIGHT CLICK to Download
Missing Lyrics:
Below are all three verses to "What Child is This", one of my favorite Christmas carols. Traditionally, we sing the last half of the first verse "This, this is Christ the King..." as the "chorus" to all three verses. However, there's really not a chorus to this carol at all, just three verses. I've highlighted the two "missing" portions of verses 2 & 3.
A quick bit about the song itself - notice in verse one that the first half is a question, "Who is this Child?", and the answer in the last half "This is Christ the King..."
Verse two asks another question:"Why is He here in such a humble place?"
Answer: He now pleads silently from the crib, but will soon scream from the cross.
And the last verse is an explanatory imperative (i.e., because of what's just been said about Him, do this for Him...), and it calls & commands all to worship the Christ child.
What Child is this who, laid to rest
On Mary’s lap is sleeping?
Whom angels greet with anthems sweet,
While shepherds watch are keeping?
This, this is Christ the King,
Whom shepherds guard and angels sing;
Haste, haste, to bring Him laud,
The Babe, the Son of Mary.

Why lies He in such mean estate,
Where ox and ass are feeding?
Good Christians, fear, for sinners here
The silent Word is pleading.
Nails, spear shall pierce Him through,
The cross be borne for me, for you.
Hail, hail the Word made flesh,
The Babe, the Son of Mary.

So bring Him incense, gold and myrrh,
Come peasant, king to own Him;
The King of kings salvation brings,
Let loving hearts enthrone Him.
Raise, raise a song on high,
The virgin sings her lullaby.
Joy, joy for Christ is born,
The Babe, the Son of Mary.