I've posted this pic on Facebook (FBers can view & comment here), but I don't think it's ever made it to the blog. The building in the foreground below is where many of us had kindergarten (Easton, Birdsong, Tolson). You're looking North at the back of the building, our playground would be to the right. Obviously, the building in the background was already gone when we started kindergarten. See caption below. 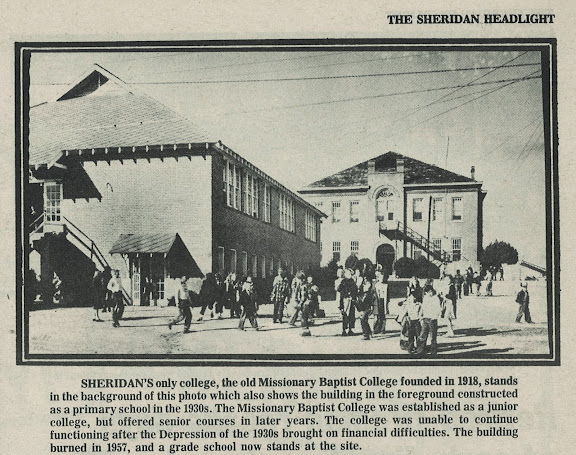 SHERIDAN'S only college, the old Missionary Baptist College founded in 1918, stands in the background of this photo which also shows the building in the foreground constructed as a primary school in the 1930's. the Missionary Baptist College was established as a junior college, but offered senior courses in later years. The college was unable to continue functioning after the Depression of the 1930's brought on financial difficulties. The building burned in 1957, and a grade school now stands at the site.