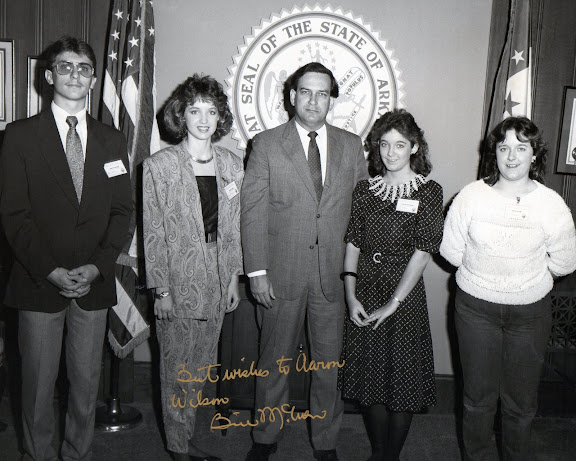 From the photo caption in the newspaper:
SHS students participating in the Secretary of State's Apprenticeship program are: (from left) Aaron Wilson, Cindy Grace, with Bill McCuen, Christi Eggburn and Kathy Flynt. The program is used to teach youth about their state government.
The lasting impact this trip had on me was minimal... in fact, I had to ask Kathy Flynt how we were even selected to attend this event. She informed me that she and Cindy were selected in Mr. Robinson's class as a result of picking the number closest to the one Mr. Robinson was thinking of. I'm sure Mr. Easton's qualifications for Christi and I were just as scholarly.
In case you don't remember Bill McCuen, he had a sad & tragic end to his political career. He died in the state prison in 2000 while serving 16 years for ethical violations. 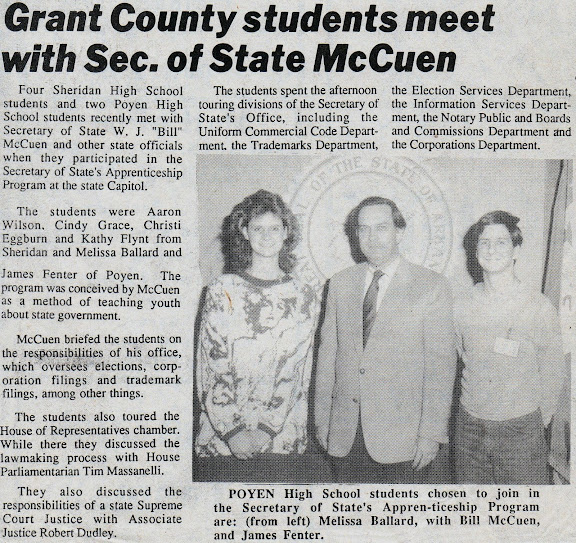 The students were Aaron Wilson, Cindy Grace, Christi Eggburn and Kathy Flynt from Sheridan and Melissa Ballard and James Fenter of Poyen. The program was conceived by McCuen as a method of teaching youth about state government.

McCuen briefed the students on the responsibilities of his office, which oversees elections, corporation filings and trademark filings, among other things.

The students also toured the House of Representatives chamber. While there they discussed the lawmaking process with House parliamentarian Tim Massanelli.

They also discussed the responsibilities of a sate Supreme Court Justice with Associate Justice Robert Dudley.