It was 19 years ago today that Sheridan High School was in the news probably for the first time since our football team made it's remarkable comeback in 1986-87. However, the contrast in the two events couldn't be more drastic.

On April 30th, 17-year-old Tommy Smith asked to address Rick Ward's history class. After Tommy expressed his love for a girl in the class, he put a gun to his head and pulled the trigger, ending his life in front of a room full of his peers.

My sister was in that class. Perhaps you or someone you know was also in the class.

Andy Welch ('85) recently sent me an article he found in People Magazine's online archives that gives a brief yet thorough, honest yet non-graphic snapshot of what would finally be 4 teen suicides in just 5 weeks.

A sign on the Sheridan Pentecostal Church says, GOD NEVER PROMISES SUNSHINE WITHOUT RAIN. But though the town's 3,200 souls have endured storms, fires and tornadoes, nothing could have prepared them for the blows of this spring. Tommy Smith was the second of four Sheridan High School teenagers who killed themselves in the tiny community in a span of five weeks. It began when Raymond Dale Wilkinson, a 17-year-old senior, took his life on March 28. Smith was next. That same evening, Thomas Chidester, 19, turned a gun on himself in his bedroom. The next day, 17-year-old Jerry Paul McCool also put a bullet in his head. The four stunning fatalities added to the nationwide toll of teen suicides that claims some 5,000 lives a year. As elsewhere, the victims were bright youths who, despite adolescent traumas, seemed to have much to live for.

Since I was away at college when this happened, it would be, well, almost wrong for me to share my own thoughts. Sure, I had a vested interest towards my sister's well being. But I knew nothing of what she & her classmates were going through. So a few days ago, I asked. I realized that I had over two dozen Facebook friends that would've been in school during this time, so I attempted to submit some questions to them, asking (respectfully, I hoped) what they remembered about "that day." Here's what I learned.

Out of over a dozen responses I received, I don't think anyone said that their lives had not been impacted by the suicides. Some are parents now, some teachers, and often reflect on their experience as they interact with their children and students. One of Tommy Smith's former classmates and friend is a social worker now who now interacts with people in crisis, doing her part to help prevent what she witnessed first hand as a teenager.

Were it possible to erase the events of their past, would they? In a heartbeat. Do they regret the many ways this has made them the people they are today? For the most part, I don't think so.

Having received about a fifty percent response to my inquiry about the suicides, I suppose that there are still those who would rather not recall the memories. One person was even honest enough to tell me that.

So, with respect towards them, thankfulness for those who did respond and in memory of Raymond, Tommy, Thomas and Jerry... I submit this blog post as a simple and insufficient memorial. 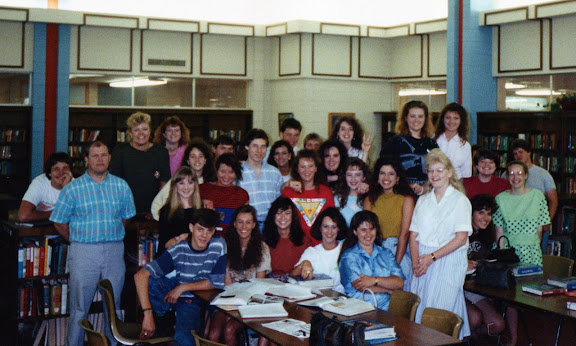 Blessed be the God and Father of our Lord Jesus Christ, the Father of mercies and God of all comfort, who comforts us in all our affliction, so that we may be able to comfort those who are in any affliction, with the comfort with which we ourselves are comforted by God.