As promised, here are some of the photos that you saw in the slideshow. You can click on any to enlarge, then RIGHT CLICK on the enlarged image to download to your computer.

All of the photos below came from Kathy Flynt. We'll see more of her collection later. This first photo was one that didn't make the slideshow. Do any of you remember who this teacher was? She was an English teacher and was a KC Royals fan. Anyone? Anyone?

BTW... are those pin holes in her arm or is she wearing a prosthetic limb? 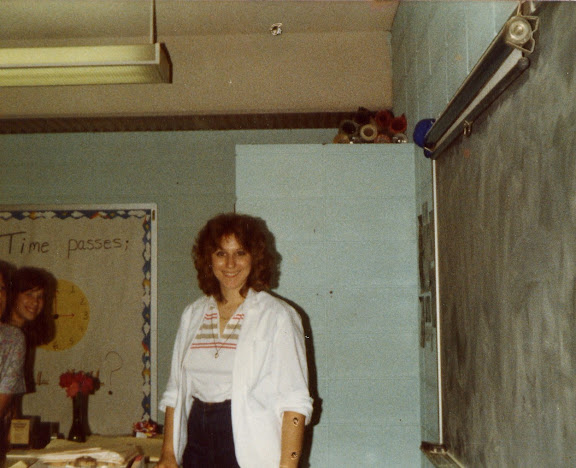 I love these next two photos. Who can forget the times we had at recess behind the middle school building?! This area now has new buildings on it... not sure where the kiddies play now.

In the first pic below we see Cindy Cobb, Serena Koon, Dena Benning, Bridget Sterrett, Kelly Thompson, Jerry Spann and David Damron in the big group. And that looks like Scott Herron off to the right in the red & gray shirt. 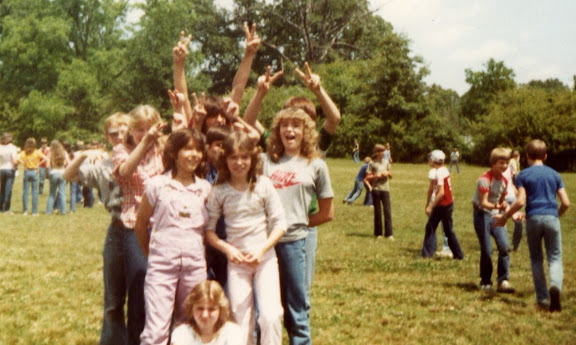 Here's David, Jerry & Bridget again. And look - see Mrs. Ray in the background!? Don't you just smile when you think of Mrs. Ray? Remember when she told us the story of how the Mississippi river was named? According to Mrs. Ray, a group traveling on a boat decided that the next words to be spoken would be the name of the river, then a tired little girl spoke up and said, "Me so seepy."

Mrs. Ray is still living. She's in one of the retirement homes in Sheridan. Her husband passed away last year I believe. I found all this out from her grandson who visited our deer camp last November with Scott Ausbrook's son, Charlie. I told him how fond we all were of his grandmother.

Also in Mrs. Smith's class - Aaron Wilson and David Damron. Check it out - I'm wearing my cool Casio watch that played BOTH "Dixie" and "Stars & Stripes Forever". Chicks were diggin' it, I swear.

Come back Wednesday for Part 2 of 3 and more middle schoold pics.