Sting Back in Yellowjackets

We've now read all 12 of Andy Mayberry's articles re-capping the 1987 SHS Football season. But let's go back a little bit farther... to 1986, at the front end of what would be one of the greatest turn-arounds in high school history. Thanks to Becky Millard ('87) for this article. 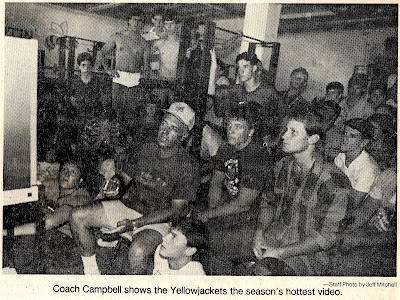 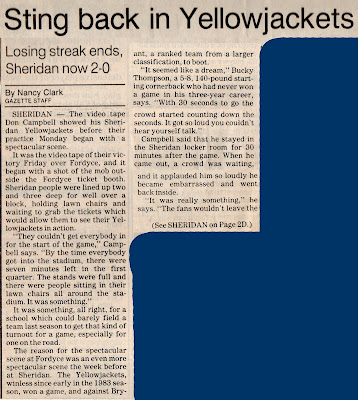 The video tape Don Campbell showed his Sheridan Yellowjackets before their practice Monday began with a spectacular scene.

It was the video tape of their victory Friday over Fordyce, and it began with a shot of the mob outside the Fordyce ticket booth. Sheridan people were lined up two and three deep for well over a block, holding lawn chairs and waiting to grab the tickets which would allow them to see their Yellowjackets in action.

“They couldn’t get everybody in for the start of the game,” Campbell says. “By the time everybody got into the stadium, there were seven minutes left in the first quarter. The stands were full and there were people witting in their lawn chairs all around the stadium. It was something.”

It was something, all right, for a school which could barely field a team last season to get that kind of turnout for a game, especially for one on the road.

The reason for the spectacular scene at Fordyce was an even more spectacular scene the week before at Sheridan. The Yellowjackets, winless since early in the 1983 season, won a game, and against Bryant, a ranked team from a larger classification, to boot.

“It seemed like a dream,” Bucky Thompson, a 5-8, 140-pound starting cornerback who had never won a game in his three-year career, says, “With 30 seconds to go the crowd started counting down the seconds. It got so loud you couldn’t hear yourself talk.”

Campbell said that he stayed in the Sheridan locker room for 30 minutes after the game. When he came out, a crowd was waiting, and it applauded him so loudly he became embarrassed and went back inside.
“It was really something,” he says, “The fans wouldn’t leave the stadium. It was like Arkansas when they beat Texas a few years ago.” 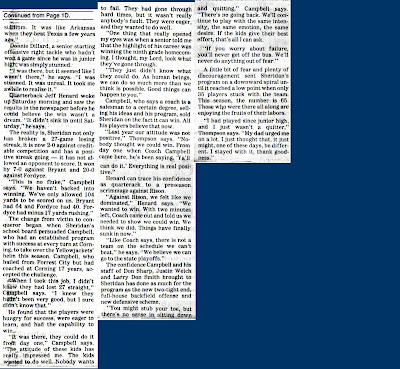 Donnie Dillard, a senior starting offensive right tackle who hadn’t won a game since he was in junior high, was simply stunned. “I was there, but it seemed like I wasn’t there,” he says. “ I was stunned. It was unreal. It took me awhile to realize it.” Quarterback Jeff Henard woke up Saturday morning and saw the results in the newspaper before he could believe the win wasn’t a dream. “It didn’t sink in until Saturday,” he says. The reality is, Sheridan not only has broken a 27-game losing streak, it is now 2-0 against creditable competition and has a positive streak going – it has not allowed an opponent to score. It won by 7-0 against Bryant and 20-0 against Fordyce. “This is no fluke,” Campbell says. “We haven’t backed into winning. We’ve only allowed 104 yards to be scored on us. Bryant had 64 and Fordyce had 40. Fordyce had minus 17 yards rushing.” The change from victim to conqueror began when Sheridan’s school board persuaded Campbell, who had an established program with success at every turn at Corning, to take over the Yellowjackets’ helm this season. Campbell, who hailed from Forrest City but had coached at Corning 17 years, accepted the challenge. “When I took this job, I didn’t know they had lost 27 straight,” Campbell says. “I knew they hadn’t been very good, but I sure didn’t know that.” He found that the players were hungry for success, were eager to learn, and had the capability to win. “It was there, they could do it from day one,” Campbell says. “The attitude of these kids has really impressed me. The kids wanted to do well. Nobody wants to fail. They had gone through hard times, but it wasn’t really anybody’s fault. They were eager, and they wanted to do well. “One thing that really opened my eyes was when a senior told me that the highlight of his career was winning the ninth grade homecoming. I thought, my Lord, look what they’ve gone through. “They just didn’t know what they could do. As human beings, we can do so much more than we think is possible. Good things can happen to you.”Campbell, who says a coach is a salesman to a certain degree, selling his ideas and his program, sold Sheridan on the fact it can win. All his players believe that now. “Last year our attitude was not positive,” Thompson says. “Nobody thought we could win. From day one when Coach Campbell came here, he’s been saying, ‘Ya’ll can do it.’ Everything is real positive.” Henard can trace his confidence as quarterback to a preseason scrimmage against Rison. “Against Rison, we felt like we dominated,” Henard says. “We wanted to win. With two minutes left, Coach came out and told us we needed to show we could win. We think we did. Things have finally sunk in now.” “Like Coach says, there is not a team on the schedule we can’t beat,” he says. “We believe we can go to the state playoffs.” The confidence Campbell and his staff of Don Sharp, Justin Welch and Larry Don Smith brought to Sheridan has done as much for the program as the new two-tight end, full-house backfield offense and new defensive scheme. “You might stub your toe, but there’s no sense in sitting down and quitting,” Campbell says. “There’s no going back. We’ll continue to play with the same intensity, the same emotion, the same desire. If the kids give their best effort, that’s all I can ask. “If you worry about failure, you’ll never get off the bus. We’ll never do anything out of fear.” A little bit of fear and plenty of discouragement sent Sheridan’s program on a downward spiral until it reached a low point when only 35 players stuck with the team. This season, the number is 65. Those who were there all along are enjoying the fruits of their labors. “I had played since junior high, and I just wasn’t a quitter,” Thompson says. “My dad urged me on a lot. I just thought that, it just might, one of these days, be different. I stayed with it, thank goodness.” 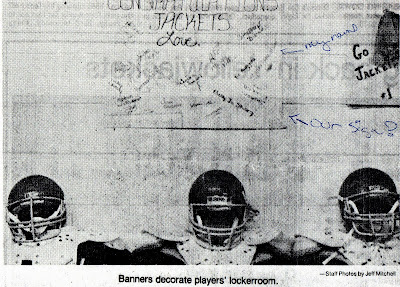