Sheridan Elementary - Before & After 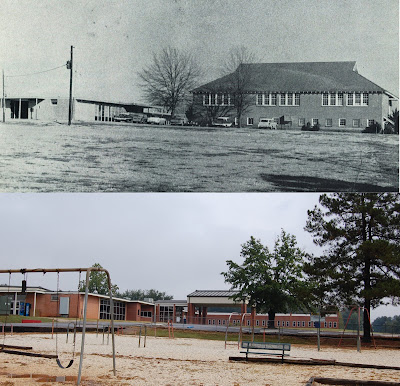 You've seen the top photo above on an earlier post, but I wanted to try something here. I was at the Sheridan Elementary School recently - which, by the way is no longer the Elementary school - it's now the Freshman Academy. I know, I know! It's just not right.

While I was there I took some pics of the playground equipment which I'll post later. I also took the recent picture above from what I thought was the same angle as the picture above. I got pretty close, and with my handy photo-manipulation program, I was able to do this (click on any photo to enlarge):

Above you can start to see the trees from the 2008 photo, as well as some of the color from the photo showing through on the building on the left. And, in a sad but telling way, the 1930's building begins to fade.

In the above 2 images, you can see our elementary playground equipment appearing in what was once an empty lot. Most of this equipment still stands today - albeit worn & ragged.

Above, the 1930's building - which held many of our very first school memories - is all but vanished from the scene. An empty, grassy area fills it's footprint.

And now we're back to the recent photo. I guess landscapes are meant to change over time. And I guess that's why we have memories.
Finally, a bit of GIF animation to help further visualize this metamorphosis :