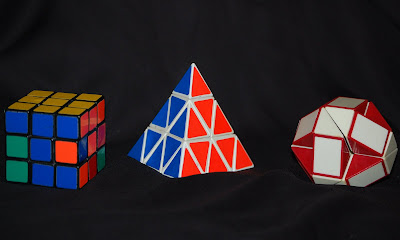 You can't have a blog about the 80's and not mention the Rubik's Cube... and his cousins: the Pyramid and the Snake. Beginning with cube, these were all hot-selling items in the mid-80's. The original Rubik's Cube remains the best selling toy - EVER! It has sold over 300 million units worldwide.

The cube has been responsible for "Cubaholics", two medical conditions called Rubik's Wrist and Cubist's Thumbs, an official organization called "Speedcubing" and it's even been blamed for a 1981 divorce. Read about these and other fascinating cube facts here. 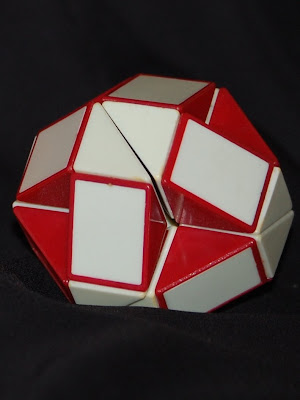 Let's start with Rubik's Snake. Let's also just lay it out on the table here that I'm still a bit of a nerd with these things... I can still solve the snake - even with my eyes closed. I said "a bit of a nerd"... I'd be a full-fledged geek if I actually caught myself on video solving this thing and posted it here on the blog. Ok... I did consider it.

The object, of course, is to take the snake - stretched out straight - and turn it into a ball (mine is pictured above, proving that I can still solve it, for you skeptics out there). I'm not really sure of the secret... seems to be just a serious of twisting moves that are repeated several times. I solve mine more by instinct than anything else. 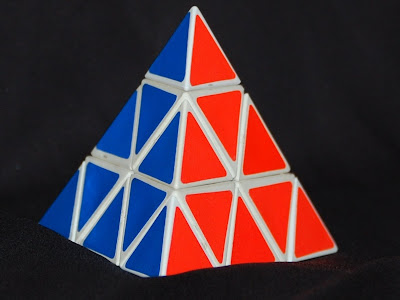 The Pyramid isn't quite as fun. I used to be able to solve mine - couldn't tell you how - but I think one of my kids pulled a piece out and replaced it incorrectly, so I've given up on it. I do have two sides solved though. 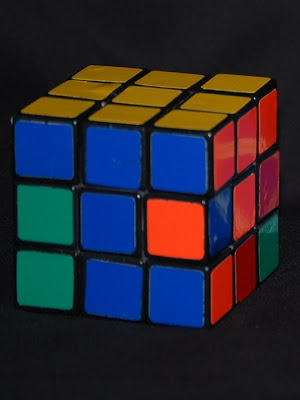 And finally, Erno Rubik's Cube that started it all in 1980.
How many of you would end up in frustration and peel the stickers off and replace them in the right sequence?
How many of you remember the cube-solving contest we had in middle school? I can't remember who won... but I wanna say that I came in with a time of 00:02:17. But it's all a blur at this point. I loved the cube though, and so did millions of others. We didn't need iPods or cellphones to distract us from school, we had a block of 25 interlocking, rotating pieces with 54 colored squares, only one solution and yet
43,252,003,274,489,856,000 different possible combinations. What a great toy! 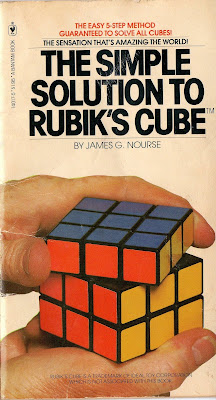 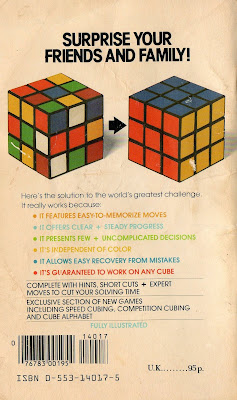 This was THE booklet to get if you wanted to learn how to solve Rubik's Cube. I scanned these images from Andrea Winston's original booklet. I asked her if I could keep it. She said "no" because she just bought a new cube and was going to try to learn how to solve it. Please don't tell her I said that. :) 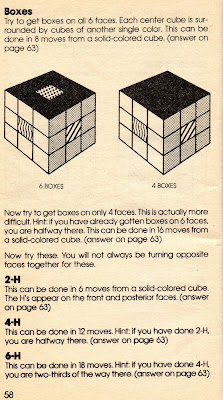 Here's a sample page. A friend of mine told me that if I could solve one side as well as the top edge, all I'd have to do is memorize a short sequence of RIGHT and LEFT turns & twists and the rest was easy. I committed the formula to memory in hopes of being the coolest nerd in the Sheridan Middle School, but I soon found out that solving the cube doesn't solve your social problems.
There are a myriad of video tutorials on YouTube, in case you wanna learn for yourself and beat Andrea Winston in the Speedcube competetion at the reunion. 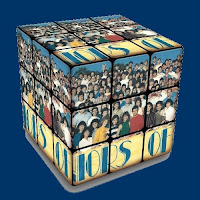