The following picture are compliments of Melissa Nesbitt. She's been digging through old photo albums and has found a treasure of priceless photos from Mrs. Blackerby's East End Elementary Kindegarten class. We've tried to identify as many as possible. If you see someone we missed, leave a comment. And, as always, you can click on any image to enlarge. 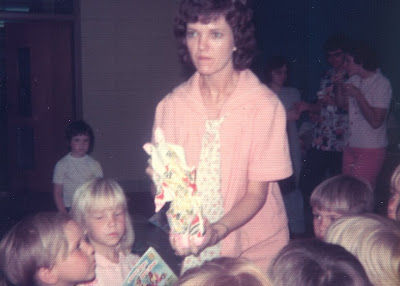 Here's Mrs. Blackerby handing out some goodies. Loyce Oden (wife of Martin Tunstall) is the blonde girl to the teacher's right and that's Mark Holly in front of her. That little boy in the background wearing the white shirt is Dana Oates. :) (Just seeing if Dana's reading the blog & paying attention!) 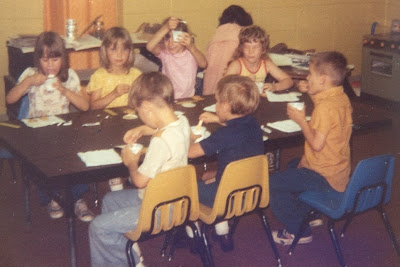 Most of these kids didn't graduate with us, but perhaps you will remember Peggy Godfrey and Angela Dillavou--Angela is holding her ice cream cup in front of her face, Peggy is on Angela's left, and on Angela's right is a girl named Alicia Beavers. And check out the Avocado green kitchen set in the back corner - just like our mothers had! 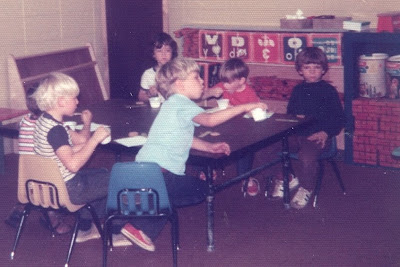 Bryan Clay, Darren Yarborough, Kenny Estell, Joe Perkins and Jerry McElyea. Again, check out the background - you've got to study these photos carefully to fully appreciate the retro-value. There are a couple of cans Playskool blocks - looks like the shaped blocks for building cool castles, and the black canister is the classic, wooden, alphabet blocks. All complete with lead paint, I'd presume. 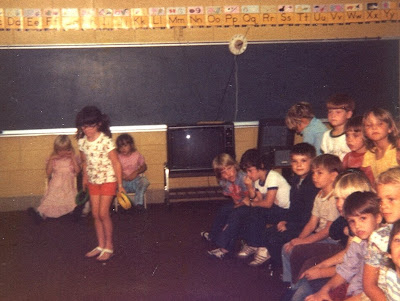 How many of you EEEers learned your ABC's off of that chart posted above the chalkboard?!
Here you have Corinna Hartman doing the ring toss. You'll also notice Lisa Bradford, Bryan Clay, Lee Kaufman, Joe Perkins, Shannon Ellington and Mike Wells. Behind them are Jerry McElyea, Kevin Young, Sid Reynolds. One of the girls sitting under the blackboard might be Loyce Oden.
Corinna is probably going first in ring toss because she's in style with those groovy thong-toe sandals. 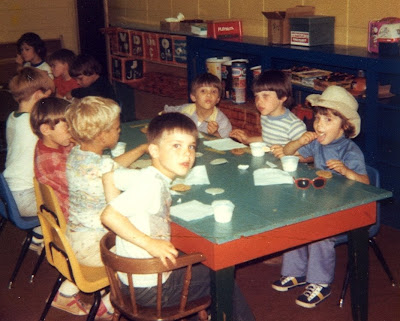 At the "Boys Table" we see Kevin Young, Sid Reynolds, Mike Wells, Lee Kaufman, Shannon Ellington and I think Danny Roberts is next to him. Don't know the kid in the cowboy hat. Way in the back are Bryan Clay, Darren Yarborough and Kenny Estell.
What else do you see? You're getting a good retro-eye if you saw a can of Tinkertoys, but you're really doing good if you discovered the US Mail, mailbox-shaped lunchbox up on the shelf. 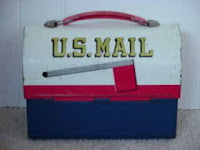 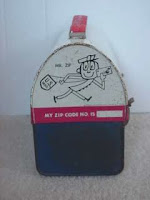 Say "Hi" to Mr. Zip kids! At the time of this posting, you could grab this very lunch box on Ebay for only $10! (Plus $10 more for S&H) Does anyone remember if this was your lunchbox or not? 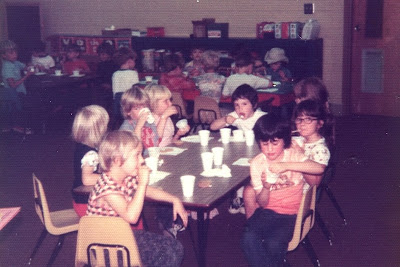 Obviously the cameraman moved back a bit to snap a shot of the girls table. We see Melissa Nesbitt, Corinna Hartman, Dana Oates, Lisa Bradford and Barbara Nall. You'll see the boys table in the background and more lunchboxes! When you enlarge the photo, you'll notice that two of the lunch boxes are exactly the same.
By the way, the kiddies are all eating ice cream out of those small plastic cups with the flat wooden spoons that were like midget tongue depressors. 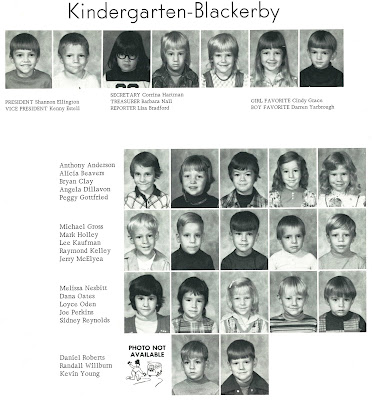 I plan on posting ALL of our Kindergarten class pictures later, but I thought I'd include Mrs. Blackerby's here to help identify everyone. If you click on this pic, you'll get a super-sized image to view. Enjoy and thanks again to Melissa Nesbitt for the photos. I've got a few more from her I'll be posting soon.
Posted by Aaron
Email ThisBlogThis!Share to TwitterShare to FacebookShare to Pinterest
Categories: classes, classmates, Elementary