Yellowjackets Fall to Badgers in Second Round of Play-offs

All good things must come to an end. 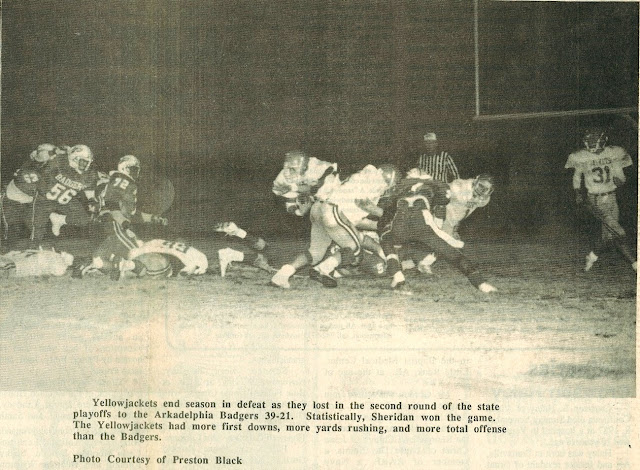 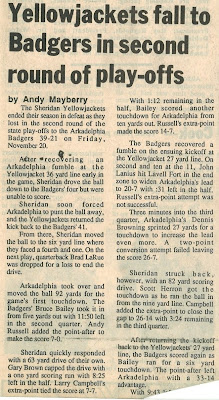 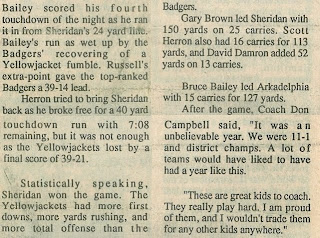 The Sheridan Yellowjackets ended their season in defeat as they lost in the second round of the state play-offs to the Arkadelphia Badgers 39-21 on Friday, November 20.

After recovering an Arkadelphia fumble at the Yellowjacket 36 yard line early in the game, Sheridan drove the ball down to the Badgers’ four but were unable to score.

Sheridan soon forced Arkadelphia to punt the ball away, and the Yellowjackets returned the kick back to the Badgers’ 41.

From there, Sheridan moved the ball to the six yard line where they faced a fourth and one. On the next play, quarterback Brad LaRue was dropped for a loss to end the drive.

Arkadelphia took over and moved the ball 92 yards for the game’s first touchdown. The Badgers’ Bruce Bailey took it in from five yards out with 11:50 left in the second quarter. Andy Russell added the point-after to make the score 7-0.

Sheridan quickly responded with a 63 yard drive of their own. Gary Brown capped the drive with a one yard scoring run with 8:25 left in the half. Larry Campbell’s extra-point tied the score at 7-7.

With 1:12 remaining in the half, Bailey scored another touchdown for Arkadelphia from ten yards out. Russell’s extra-point made the score 14-7.

The Badgers recovered a fumble on the ensuing kickoff at the Yellowjacket 27 yard line. On second and ten at the 11, John Lanius hit Lavell Fort in the end zone to widen Arkadelphia’s lead to 20-7 with :31 left in the half. Russell’s extra-point attempt was not successful.

Three minutes into the third quarter, Arkadelphia’s Dennis Browning sprinted 27 hards for a touchdown to increase the lead even more. A two-point conversion attempt failed leaving the score 26-7.

Sheridan struck back, however, with an 82 yard scoring drive. Scott Herron got the touchdown as he ran the ball in from the nine yard line. Campbell added the extra-point to close the gap to 26-14 with 3:24 remaining in the third quarter.

After returning the kickoff back to the Yellowjackets’ 27 yard line, the Badgers scored again as Bailey ran for a six yard touchdown. The point-after left Arkadelphia with a 33-14 advantage.

With 9:43 left in the game, Bailey scored his fourth touchdown of the night as he ran it in from Sheridan’s 24 yard line. Bailey’s run was set up by the Badgers’ recovering of a Yellowjacket fumble. Russell’s extra-point gave the top-ranked Badgers a 39-14 lead.

Herron tried to bring Sheridan back as he broke free for a 40 yard touchdown run with 7:08 remaining, but it was not enough as the Yellowjackets lost by a final score of 39-21.

After the game, Coach Don Campbell said, “It was an unbelievable year. We were 11-1 and district champs. A lot of teams would have liked to have had a year like this.

“These are great kids to coach. They really play hard. I am proud of them, and I wouldn’t trade them for any other kids anywhere.” 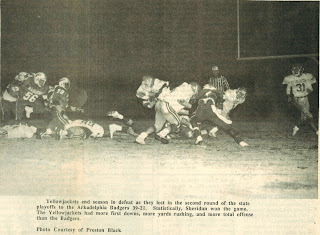