As Christmas rolls around once again, letters to Santa begin filling the post office to be sent to the North Pole. Sheridan High School seniors may consider themselves too old to be writing to Santa in 1987, but here are a few of the letters written to the jolly old man in 1976.

These letters are taken from the Sheridan Headlight of December 25, 1976.

Dear Santa Claus,
I’m going to have a very nice Christmas. I want a lot of presents like Barbie clothes, an iron and a bicycle. I have been very good. Bring Nancy and Papa something good for Christmas.
Love,
Laurette (Lankford)

Dear Santa,
My name is Angela Rogers and I am five years old. I have been very good this year. I would like to have a baby doll that crawls and walks or one that kisses, a record player and a watch.
Your friend,
Angela (Rogers)

Dear Santa,
I want a bicycle and a doll and a little kit with lipstick and stuff. That’s all.
Love,
Gina McCool

Dear Santa,
I want an ice Bird, a thing that can make pizza, a piñata, a G. I. Joe, a G. I. Joe suit and a motor cross bike. Just the parts.
Love,
Scott Herron

Dear Santa,
I am good most of the time. I want some Walkie Talkies and Snoopy’s Drive-In Movies. I’ve been a good boy.
Phillip A. Clifford

Dear Santa,
I wish it would be a good Christmas. I want a play Six-million Dollar man doll.
Love,
Kevin Matlock 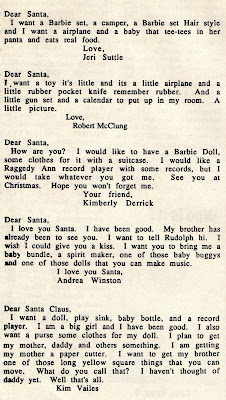 Dear Santa,
I want a Barbie set, a camper, a Barbie set Hair style and I want a airplane and a baby that tee-tees in her pants and eats real food.
Love,
Jeri Suttle

Dear Santa,
I want a toy it’s little and it’s a little airplane and a little rubber pocket knife remember rubber. And a little gun set and a calendar to put up in my room. A little picture.
Love,
Robert McClung

Dear Santa,
How are you? I would like to have a Barbie Doll, some clothes for it with a suitcase. I would like a Raggedy Ann record player with some records, but I would take whatever you got me. See you at Christmas. Hope you won’t forget me.
Your friend,
Kimberly Derrick

Dear Santa,
I love you Santa. I have been good. My brother has already been to see you. I want to tell Rudolph hi. I wish I could give you a kiss. I want you to bring me a baby bundle, a spirit maker, one of those baby buggys and one of those dolls that you can make music.
I love you Santa,
Andrea Winston

Dear Santa Claus,
I want a doll, play sink, baby bottle, and a record player. I am a big girl and I have been good. I also want a purse some clothes for my doll. I plan to get my mother, daddy and others something. I am getting my mother a paper cutter. I want to get my brother one of those long yellow square things that you can move. What do you call that? I haven’t thought of daddy yet. Well that’s all.
Kim Vailes

PREVIEW: Be sure and return because later in this "12 Days of Christmas" series, I'll have pictures from a 1976 JC Penney Christmas Catalog that very well could've been the same catalog that many of us poured over as we made our Christmas lists! You don't wanna miss this. Here's a little sneek peak: 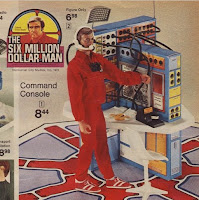