There could be no better day than Halloween to post this article reporting our shut-out of the black & orange rivals from Malvern! 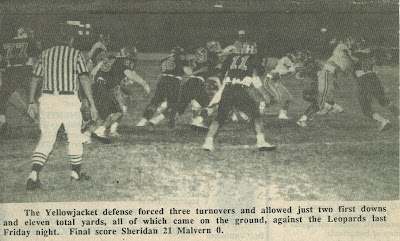 The Yellowjacket defense forced three turnovers and allowed just two first downs and eleven total yards, all of which came on the ground, against the Leopards last Friday night. Final score Sheridan 21 Malvern 0. 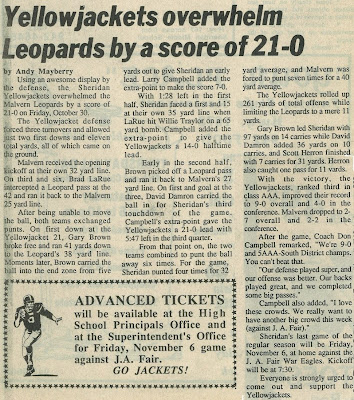 Using an awesome display by the defense, the Sheridan Yellowjackets overwhelmed the Malvern Leopards by a score of 21-0 on Friday, October 30.

The Yellowjacket defense forced three turnovers and allowed just two first downs and eleven total yards, all of which came on the ground.

Malvern received the opening kickoff at their own 32 yard line. On third and six, Brad LaRue intercepted a Leopard pass at the 42 and ran it back to the Malvern 25 yard line.

After being unable to move the ball, both teams exchanged punts. On first down at the Yellowjacket 21, Gary Brown broke free and ran 41 yards down to the Leopard’s 38 yard line. Moments later, Brown carried the ball into the end zone from five yards out to give Sheridan an early lead. Larry Campbell added the extra-point to make the score 7-0.

With 1:28 left in the first half, Sheridan faced a first and 15 at their own 35 yard line when LaRue hit Willie Traylor on a 65 yard bomb. Campbell added the extra-point to give the Yellowjackets a 14-0 halftime lead.

Early in the second half, Brown picked off a Leopard pass and ran it back to Malvern’s 27 yard line. On first and goal at the three, David Damron carried the ball in for Sheridan’s third touchdown of the game. Campbell’s extra-point gave the Yellowjackets a 21-0 lead with 5:47 left in the third quarter.

The Yellowjackets rolled up 261 yards of total offense while limiting the Leopards to a mere 11 yards.

Gary Brown led Sheridan with 97 yards on 14 carries while David Damron added 36 yards on 10 carries, and Scott Herron finished with 7 carries for 31 yards. Herron also caught one pass for 11 yards.

After the game, Coach Don Campbell remarked, “We’re 9-0 and 5AAA-South District champs. You can’t beat that.

“Our defense played super, and our offense was better. Our backs played great, and we completed some big passes.”

Campbell also added, “I love these crowds. We really want to have another big crowd this week (against J. A. Fair).”

Sheridan’s last game of the regular season will be Friday, November 6, at home against the J. A. Fair War Eagles. Kickoff will be at 7:30.

Everyone is strongly urged to come out and support the Yellowjackets.