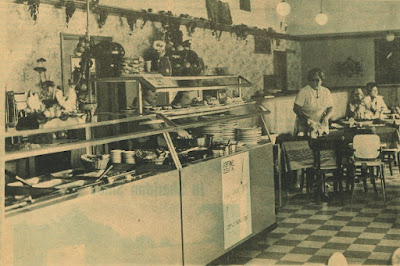 Last week I posted the pic above to see if anyone could identify the location. Debra Howard & Scott Warmack were the only ones to comment & both were correct. This is Essie's Restaurant in Sheridan - (currently "Karla's") - where we held our senior breakfast (when it was "Charlie's" - owned by Travis Miller's family). Can anyone think of any other owner's and/or names this famous restaurant has had?
My memories of Essie's go way back before our senior breakfast... Scott's recollection of the organist is starting to ease it's way back into my mind, but I had totally forgotten about that until he mentioned it.
I spent many mornings at Essie's with my Papaw as he stopped for his morning coffee. The waitresses would always ask, "You got your helper with you today, Si?" I'd impatiently wait for him to finish that bottomless cup o' joe, only to have the waitress come back around and top it off again! Papaw would eventually finish up and was faithful to leave 2 quarters as a tip for his waitress. Fifty cents didn't seem like much, but I'm guessing the coffee cost less than that.
I always wanted one of those cow-head kiddee cups that they displayed high up on the shelf on the back wall. Never got one though. I did eat six whole tacos one Thursday night during the Mexican buffet. I thought I was an animal! I also remember the towel dispenser in the restroom - one of those that had the roll of cloth towel that you had to crank out until you found a dry spot. I just assumed we all were reusing the same towel... that was back before we had germs.
Well, I don't know if you can get tacos at Karla's on Thursday nights anymore, but you can get them almost any night at the Midget Market. That's right, the MM is a Mexican Restaurant now. No more video games.