It's time for our next installment of the NHS Lip Sync videos, only this time - I'm doubling your sync-adelic pleasure! You heard me clearly - TWO videos today. Here's why...

The first video features the Saline County Bad Boys, consisting of '89ers Shawn Stephens & Curtis McElyea and our own Jerry McElyea (I'm not sure who the drummer is). The Bad Boys performed "Modern Day Cowboy".

The second video features the greatest lip sync performance to ever fake it's way onto the stage of the SHS auditorium. I'm telling ya... these guys gave Rob Pilatus and Fabrice Morvan a run for their money. Ju Ju and the Harshaws was the group and featured '89 grad Eric Hanson, Trent Allen, Larry Campbell, and yours truly - Aaron Wilson. Am I biased? Heck yeah! We were the best group, the most creative, most original (check out the trash can drums & tennis racket guitars) and recieved the greatest crowd response (besides Stephanie Williams doing Debbie Gibson's "Stayin' Together"). This was a no -brianer. Ju Ju would sweep up.

Now, I had remembered doing a thing or two in our act that showed a bit of a tongue-in-cheek... slight mockery sort of thing, but I had forgotten just how much we mocked. Keep in mind, we're immature high schoolers... I would NEVER do something like this now. :)

Seems that while we were waiting to audition (you don't think the faculty would let a group of teenagers take the stage without some sort of screening process, do you?), the Bad Boys were ahead of us. We studied their performance, mannerisms & wardrobe and our little imaginations just started churning out the ideas. As you watch first the Bad Boys and then the Harshaws, notice any similarities you see between the groups. I've noted a few during the video via pop-up windows. If you see any, remember - they were all intentional! My apologies to the Saline County Bad Boys... it was years ago.

Well there's your winner folks. That simple. Next week we'll watch the final performance featuring the Student Council, and we'll also see who won (as if that isn't obvious by now). But wait - there's more! Below are the very pair of jeans I wore in the Lip Sync contest - in a much smaller waist size than what I wear now. 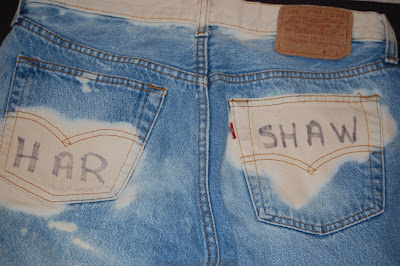 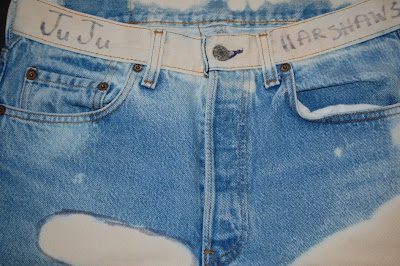 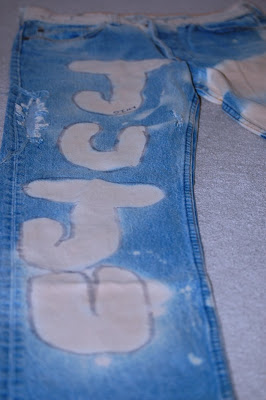 BTW... do any of you remember the significance of the name Ju Ju Harshaw? Anyone? Anyone? A true Hog fan should be able to give an answer.

What about those other guys I mentioned? Did you recognize their names? Who are Rob Pilatus and Fabrice Morvan? Perhaps you remember them better as Rob & Fab.