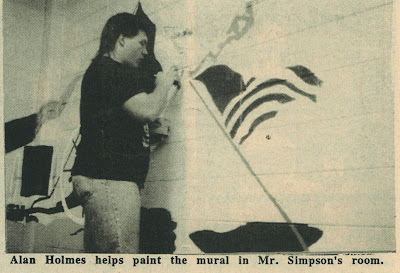 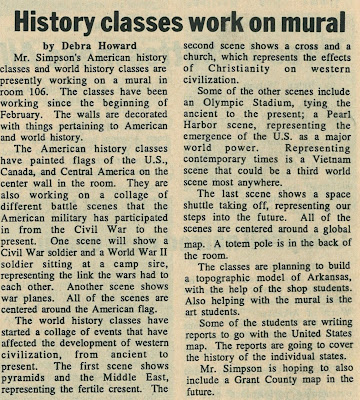 The American history classes have painted flags of the U.S., Canada, and Central America on the center wall in the room. They are also working on a collage of different battle scenes that the American military has participated in from the Civil War to the present. One scene will show a Civil War soldier and a World War II soldier sitting at a camp fire, representing the link the wars had to each other. Another scene shows war planes. All of the scenes are centered around the American flag.

Some of the other scenes include an Olympic Stadium, tying the ancient to the present; a Pearl Harbor scene, representing the emergence of the U.S. as a major world power. Representing contemporary times is a Vietnam scene that could be a third world scene most anywhere.

The last scene shows a space shuttle taking off, representing our steps into the future. All of the scenes are centered around a global map. A totem pole is in the back of the room.

The classes are planning to build a topographic model of Arkansas, with the help of the shop students. Also helping with the mural is the art students.

Some of the students are writing reports to go with the United States map. The reports are going to cover the history of the individual states.

Mr. Simpson is hoping to also include a Grant County map in the future.

In a twist of tragic irony, Room 206 soon made it's own history. On May 1st of 1990, junior Thomas Smith stood before his classmates and shot himself to death in this very room. My younger sister, Lisa, sat and watched.

Smith was one of four SHS students to commit suicide all within a month. Sheridan was stunned.
Posted by Aaron
Email ThisBlogThis!Share to TwitterShare to FacebookShare to Pinterest
Categories: random, teachers