For those of you with kids already in junior high & high school, I'm afraid you could affirm that this problem hasn't gone away. 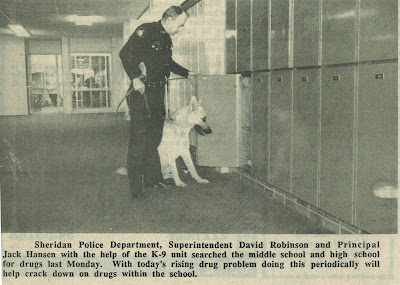 Sheridan Police Department, Superintendent David Robinson and Principal Jack Hanson with the help of the K-9 unit searched the middle school and high school for drugs last Monday. With today's rising drug problem doing this periodically will help crack down on drugs within the school. 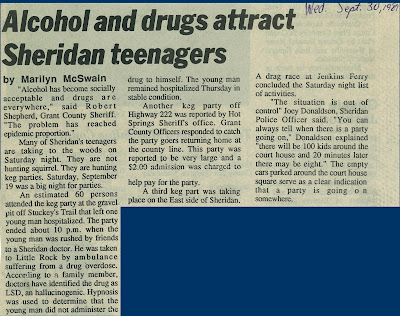 Many of Sheridan’s teenagers are taking to the woods on Saturday night. They are not hunting squirrel. They are hunting keg parties. Saturday, September 19 was a big night for parties.

An estimated 60 persons attended the keg party at the gravel pit off Stuckey’s Trail that left one young man hospitalized. The party ended about 10 p.m. when the young man was rushed by friends to a Sheridan doctor. He was taken to Little Rock by ambulance suffering from a drug overdose. According to a family member, doctors have identified the drug as LSD, an hallucinogenic. Hypnosis was used to determine that the young man did not administer the drug to himself. The young man remained hospitalized Thursday in stable condition.

Another keg party off Highway 222 was reported by Hot Springs Sheriff’s office. Grant County officers responded to catch the party goers returning home at the county line. This party was reported to be very large and a $2.00 admission was charged to help pay for the party.

A third keg party was taking place on the east side of Sheridan. A drag race at Jenkins Ferry concluded the Saturday night list of activities.

“The situation is out of control,” Joey Donaldson, Sheridan Police Officer said. “You can always tell when there is a party going on,” Donaldson explained. “There will be 100 kids around the court house and 20 minutes later there may be eight.” The empty cars parked around the court house square serve as a clear indication that a party is going on somewhere.

On a lighter note... I hope the locker being inspected above didn't belong to Reggie Gatewood ('89) or David Damron... 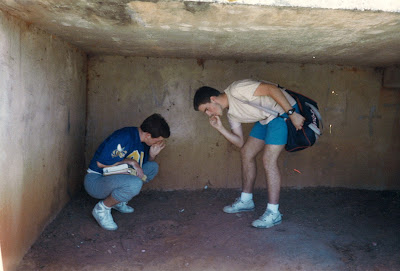