Football season is here. Some of you are big Hog fans that mecca to NW Arkansas several times in the fall. Many of you are still warming the aluminum bleachers each week watching the Yellowjackets play. Some of you are even watching your own children take the field now as ball players, band members and cheerleaders on the very same field that you once called your own.

Suffice it to say that this time twenty years ago, there was a LOT of buzz about the upcoming SHS season. We had come out of a 7-3-1 record which broke Sheridan's 27 game losing streak. Sheridan, Arkansas had been featured in countless newspaper articles and news stories because of our sudden success. We weren't just small town nobodies anymore, we were winners. And little did we know, but the best was yet to come.

This post kicks off a series of posts coming to you each Friday morning (coinciding with our current SHS Football schedule) featuring the very articles written by our own Andy Mayberry in the weekly Sheridan Headlight that gave us a play by play recap of each game. My thanks to Andy for doing these great write-ups many years ago.

Also, thanks goes to Vicki (Ausbrooks) Fletcher for typing up these articles. You should be able to read the actual article by clicking & enlarging the image, but I also wanted it in print in each blog post so all the names mentioned could be found in a google search.

So, grab your Jacket Racket Cans and join us each Friday as we go back in time and re-live the glory days of our undefeated football season! 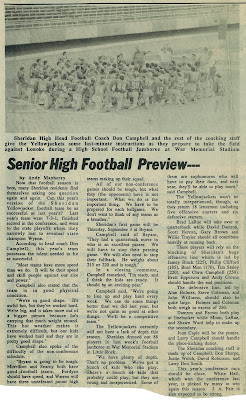 Senior High Football PreviewBy Andy Mayberry
(Originallly published Wednesday, September 2, 1987)
Now that football season is here, many Sheridan residents find themselves asking one question again and again. Can this year’s version of the Sheridan Yellowjacket football team be as successful as last year’s? Last year’s team went 7-3-1, finished second in the conference, and went to the state playoffs where they narrowly lost to eventual state champion Wynne.

According to head coach Don Campbell, this year’s team possesses the talent needed to be as successful.

“Most teams have more speed than we do. It will be their speed and skill people against our size and power.”

Campbell also stated that the team is in good physical condition.

“We’re in good shape. It’s awful hot, but they’ve worked hard. We’re big, and it takes more out of a bigger person because he’s carrying that much weight around. This hot weather makes it extremely difficult, but our kids have worked hard and they are in pretty good shape.”

Campbell also spoke of the difficulty of the non-conference schedule.

“Bryant is going to be tough. Morrilton and Searcy both have good football teams. Fordyce should have speed, and Warren will have three undefeated junior high teams making up their squad.

All of our non-conference games should be tough, but what they (the opponents) have is not important. What we do is the important thing. We have to be prepared for each ballgame. We don’t want to think of any teams as a breather.”

Sheridan’s first game will be Thursday, September 3 at Bryant.

Campbell said of Bryant, “They had a quarterback move in who is an excellent passer. We will have to stop their passing game. We will also need to stop their fullback. He weighs about 215 or 220 and is tough.”

In a closing comment, Campbell remarked, “I’m ready, and I think the kids are ready. It should be an exciting year.”

Campbell said, “We’re going to line up and play hard every week. We can do some things better than we did last year, but we’re not quite as good at other things. We’ll be a competitive team.”

The Yellowjackets certainly will not have a lack of depth this season. Sheridan dressed out 88 players in last week’s football jamboree at War Memorial Stadium in Little Rock.

“We have plenty of depth. That’s no problem. We’ve got a bunch of kids who can play. There’s a bunch of kids that probably could play, but they are young and inexperienced. Some of them are sophomores who will have to pay their dues, and next year, they’ll be able to play more,” said Campbell.

Brad LaRue will take over at quarterback while David Damron, Scott Herron, Gary Brown and Willie Traylor should all contribute heavily at running back.

These players will rely on the blocking of Sheridan’s huge offensive line which is led by Jamey Black (225), Phillip Clifford (185), Brand Moon (170), Tim Staley (220), and Chris Campbell (250). Brett Epperson and Andy Crouse should handle the end positions.

The defensive line, led by Alan Holmes, Steve Coleman, and John Williams, should also be quite large. Holmes and Coleman both weigh in excess of 250.

Damron and Brown both play at linebacker while Moon, La Rue, and Shawn Ward help to make up the secondary.

Juan Caple will be the punter, and Larry Campbell should handle the place-kicking duties.

The Sheridan coaching staff is made up of Campbell, Don Sharpe, Justin Welch, David Robinson, and Larry Don Smith.

This year’s conference race should be close. White Hall, which won the conference last year, is picked by many to win again this season. J. A. Fair is also expected to be strong.
Posted by Aaron
Email ThisBlogThis!Share to TwitterShare to FacebookShare to Pinterest
Categories: football, sports