One of the many claims to fame of the great SHS Class of 88 is that we were the first class to participate in the 4th grade choir. Below are two pics of the group that many of you inaugurated.

I wasn't in it. I loved to sing. I wanted to be in it. Really bad. But I was ashamed to admit it. Really. I wanted to join but was afraid I'd be the only boy in the whole choir. "Choir Boy" isn't a name a boy wants to inherit when he's 10 years old, trust me. So, because of the overwhelming fear of man in me, I missed out on an historic event - the very first Sheridan Elementary Choir. After I had learned who all was in the choir, I was sorely dissappointed in myself. I still lie awake at night... wondering what my life would be like today if I'd only stepped up. 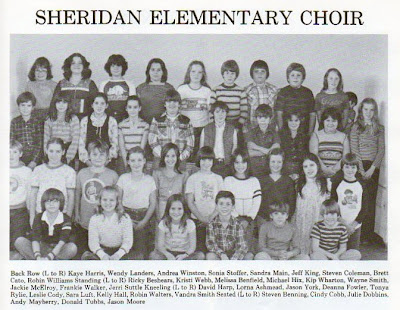 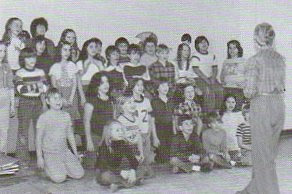 Mrs. Liz Shannon (Leigh Shannon's mom) was the music teacher and this might've even been her first year at the school - not sure. Do you remember which room we had music in once Mrs. Shannon arrived? It was the last room on the fourth grade row, down on the east end of the building.

At least two songs are still stuck in my mind... this first one is a Halloween song called, "Skin and Bones". You can hear a similar melody on amazon and a discussion of this song & variations thereof here.

The other song I remember didn't turn up on google anywhere, it went like this:

Seems the verses then would describe different job uniforms - policeman, nurse, etc. Anyone remember this one?

I vaguely remember this last song... but the skin & bones tune would always scare the kerjeebers out of me.

Posted by Aaron
Email ThisBlogThis!Share to TwitterShare to FacebookShare to Pinterest
Categories: Elementary