I posted this article back when I first started this blog, but thought I'd repost it in chronological order with the football articles. I've also added the text to the article - again, thanks to Vicki (Ausbrooks) Fletcher. And, I've added an additional photo at the end. 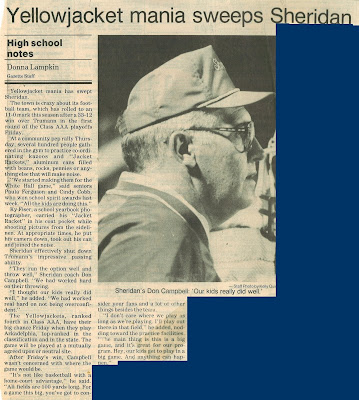 The town is crazy about its football team, which has rolled to an 11-0 mark this season after a 33-12 win over Trumann in the first round of the Class AAA playoffs Friday.

At a community pep rally Thursday, several hundred people gathered in the gym to practice coordinating kazoos and “Jacket Rackets,” aluminum cans filled with beans, rocks, pennies or anything else that will make noise.

“We started making them for the White Hall game,” said seniors Paula Ferguson and Cindy Cobb, who won school spirit awards last week. “All the kids are doing this.”

Ky Fiser, a school yearbook photographer, carried his “Jacket Racket” in his coat pocket while shooting pictures from the sidelines. At appropriate times, he put his camera down, took out his can and joined the noise.

“They run the option well and throw well,” Sheridan coach Don Campbell. “We had worked hard on their throwing.

“I thought our kids really did well,” he added. “We had worked real hard on not being overconfident.”

The Yellowjackets, ranked fourth in Class AAA, have their big chance Friday when they play Arkadelphia, top-ranked in the classification and in the state. The game will be played at a mutually agreed upon or neutral site.

After Friday’s win, Campbell wasn’t concerned with where the game would be.

“It’s not like basketball with a home-court advantage,” he said. “All fields are 100 yards long. For a game this big, you’ve got to consider your fans and a lot of other things besides the team.

“I don’t care where we play as long as we’re playing. I’ll play out there in that field,” he added, nodding toward the practice facilities. “The main thing is this is a big game, and it’s great for our program. Hey, our kids get to play in a big game. And anything can happen.” 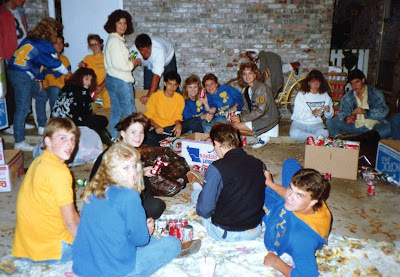