The Horse, Of Course 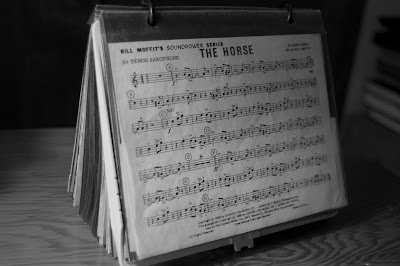 Recently, a dialogue on Facebook began around the topic of the Sheridan Alma Mater vs. the school fight song. Many of you can sing some of the alma mater (if you can't, go here to listen), but do you even know what the school's fight song was?

Our friend and '87 grad, Steve Warmack, gave us some helpful information about the fight song. He said,

"When I got to high school the fight song was "The Horse" as shown [here] but without the stupid dancing. It had no words and was originally performed by Cliff Nobles and Co. and charted in June of 1968. After... Doug West took over as band director... he dictated that we change our fight song to the musically superior yet less fun "Swing March" ... for a year or two and then he let us go back to "The Horse". I have no clue what they use as a fight song today.

Another interesting note about "The Horse". Cliff Nobles and Co. released a single called "Love is All Right" and on the B-side of the single.. they simply put the music tracks, sans singer, and called it "The Horse"... this explains the repetitive nature of the song... as the melody is missing."

And there you have some fightsong trivia. You can listen to an abbreviated version of Side B, "The Horse" below.

Here's a few other songs you might remember coming from the band stand:

Here some studio recordings/covers of these great numbers:

~ On Broadway, George Benson
~ Here's a college band's rendition of Birdland originally performed by Manhatten Transfer
~ And an rare video of the Jackson Five singing Birdland
~ And my favorite "performance" of Twist and Shout by none other than Ferris Bueller. 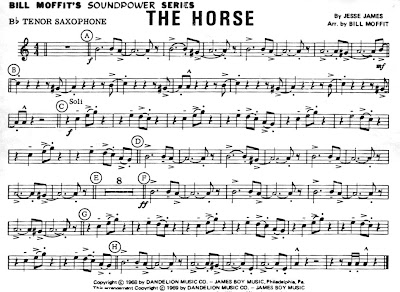